Once on eBay, it was noticed that an iPhone 4s is being sold, while it was six years old with a broken screen for $149,999. This news got viral. So, we will discuss this thing today. We all know that iPhones are very expensive and are in the list of premium phones. They have their name in the smartphone market because of their quality.

Well, you might be thinking that what’s the specialty for its sky touching price. Well, the reason for this is that at the phone’s back cover there is the name of Apple’s co-founder, that is Steve Jobs. It was said that ”To honor and to give tribute to late Steve Jobs 1 of only 56 iPhones is made.

The following design just became more and more famous in the low period of time, but as due to the design  Apple earned a lot, some other companies also tried to make a copy of that design given by Jonathan Mak. But those were an unlicensed product.

The one of the known company that was “Godgenie company” also used this logo, this company was also known as it manufacture some special model of iPhone 4S.

But due to some casualties, Godgenie company made only 56 devices that were special and got high earning by smartphone market. 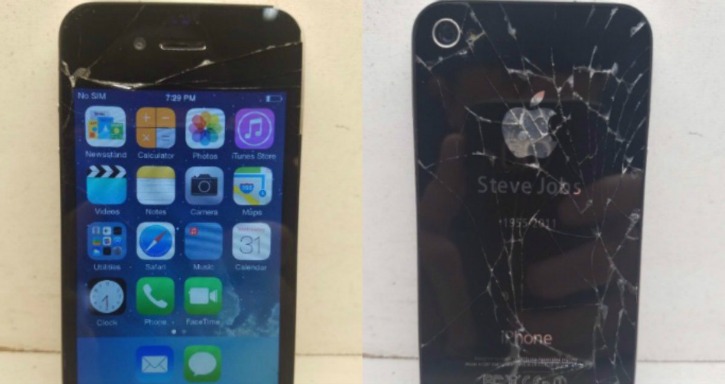 Well after that in your mind the question might me rising that the following logo was Godgenie made or not?

It was not!! One way to identify was, the Godgenie’s iPhone which was actually fake were with the golden back panel.  As the original one was with transparent glass. Well since it was on the sale in the online shop which was eBay it was claimed to be “Fake Limited Edition.”

So this was the reason for this broken iPhone with its sky touching price on eBay.

Google Employee Death Benefits. Do You Know What Their Spouse Gets ??

Google Employee Death Benefits. Spouse Gets Half Pay For 10 Yrs And Children Gets $1,000 per month. Yes! You heard it right. Well we all know, Google treats its employees far better than any companies. The employees working in Google are already satisfied enough with the free services like free food, fitness classes to laundry […]

Apple Might Replace The Home Button On The iPhone 8 with A ‘Function Area’, Much Like The New Macbook Pro

According to the investor statement, reliable Apple analyst Ming-Chi Kuo boasts that the new iPhone 8 will ditch the house button totally and adopt a fresh “function area” in the bottom of the phone. In tandem with the rumor of experiencing a bezel body, this feature might be possible and cause increasing the screen size […]

Jio Phone for Free? No, it’s not. Rs.4500 must be spent for 3 Years or be ready to pay extra if you return before 3yrs. Here is everything you need to know about JIO Rs 1500 Phone Jio Phone, the 4G feature phone unveiled by Reliance Jio in July, will cost you much more than […]